skip to main | skip to sidebar

... Life is busy when you're a junior detecto, so I'm going to refer all inquiries for the next while to Melanie's website.

The Case of the Plot-Twisty Lawyer

Who says mystery stories aren’t relevant to everyday life? Not Sonia Sotomayer, the judge who’s about to become a Supreme Court Justice of the United States. Ms. Sotomayer cited the Perry Mason mystery novels, by Erle Stanley Gardner, as having helped influence her to go into law.

My librarian mother, Suzanne, glowed when she heard about Sonia. “I watched the Perry Mason TV show slavishly when I was a girl,” Mother reminisced. “I so wanted to be Perry’s secretary, Della Street, scrambling around crime scenes in designer suits and stiletto heels, and never springing even a ladder in her stocking.”

Uh, o-kaaay, Mother. Myself, I take pride in the rumpled look. It’s so lived-in, if you know what I mean.

Turns out my soon-to-be-brother-in-law, Jack (you first meet him in The Spy in the Alley), has watched all the old Perry Masons on DVD. He says his favourite episode is The Case of the Deadly Verdict, where Perry saves a woman at the last possible nano-second from the gas chamber. Phew!

Here’s what mystery writer Scott Turow says: “What I took from Perry Mason was the child-like delight in the surprise and in a plot as revelation of character. In the sense that the significant turn of the plot ends up deepening your understanding of somebody and what they had at stake in the situation.”
Posted by Melanie Jackson, author, editor, piano student at 1:57 PM 1 comment:

In Queen of Disguises, an escaped con, the actress-turned-thief Violet Bridey, is stalking me. I’m on Salt Spring Island, trying to get in shape. (BTW, I hate that expression. An egg is a shape, right? Ditto a pear, and certainly an M & M.) Vengeful Vi has sworn to hunt me down and exact revenge for sending her to jail.

Well, the Mississauga Public Library did me the honor of naming Queen of Disguises one of its top 10 kids’ reads for summer 2009. I’m tickled pink. Thank you, MPL!

Here’s a joke for you. Mississauga is a long word. How do you spell it? Ha ha ha. Yeah, I know. I should go on Leno.

One last thing, and then I gotta flee the ever-baleful Bridey. Check out my friend Cynthia Nugent’s new blog, about her upcoming book with Orca, Fred and Pete at the Beach. Fred and Pete are dogs based on Cynthia and my own author, Melanie Jackson. Talk about a tale to wag.
Posted by Melanie Jackson, author, editor, piano student at 2:32 PM 3 comments:

The caves are alive with the sound of music?

To paraphrase the philosopher: I sing, therefore I am. Human beings need music in their lives! And not just humans in recent history; ones who lived wa-a-a-ay back, too. In a remote valley of Germany, archeologists have unearthed a 35,000-year-old flute, the oldest instrument ever discovered. Using stone tools, a cave person carved the flute from the hollow wing-bone of a giant vulture, according to the Vancouver Sun.

Maybe the Flintstone-era folk believed, as I do, that music lifts you up and makes you feel better, even when things aren’t going well. Like I say about music in The Man in the Moonstone, “It cleared bad things away, just like … well, just like opening the bathroom window cleared away the smell of our cat Wilfred’s litter.”
Posted by Melanie Jackson, author, editor, piano student at 1:21 PM No comments:

‘Defanitely’? Get a grip on your spelling, people!

As someone raised by a librarian mom, I may gripe about eating my broccoli, but never about spelling it with only one c. And I may not agree with Mother that tidying my room is necessary, but I would never DARE tell her it’s unecessary. Good grief! So, whatever my other wee flaws – acting before I think, say, or being a tad too blunt – I definitely think correct spelling is important. Oh, and note that it’s definitely, not defanitely, as most people misspell it. According to the Scottish Daily Record, “definitely” is the number-one misspelled word in the English language. The others I've noted above follow shamefully behind. Sigh. All of you who get your words wrong, may the spelling bee sting you!
Posted by Melanie Jackson, author, editor, piano student at 10:51 AM No comments:

Eccentric characters? The real-life ones are even weirder

At a school presentation recently, a student asked Melanie, “How do you think of these funny characters, like the warty-nosed fortune teller in Queen of Disguises?” Well, the answer is: Melanie draws them, like a bucket from a well, from real life. And real-life characters are funnier than any she could make up. If Melanie invented characters similar to the real people you read about, she’d be accused of being too far-fetched.

For a real-life example of eccentric types, the Daily Mail reported on a posh London club where – get this – toilet paper is being pilfered! The snooty Hurlingham Club, whose waiting list to belong is 15 years, issued an angry memo to patrons about “conduct unbecoming.” As a junior sleuth, I’d advise the club: look for someone with a very large purse – that’s the only way a person could smuggle out toilet paper.

But the thefts don’t stop in the washrooms. Reports the Mail: “ … a lady member [was] filling her own bottle from the hand-lotion dispenser.” The light-fingered lass also pocketed “a decoration from the club Christmas tree and potpourri by the handful.” Potpourri’s that scented stuff your mom leaves out to make rooms smell nice.

Seems to me the Hurlington Club, potpourri or no, is smelling awfully fishy these days.
Posted by Melanie Jackson, author, editor, piano student at 11:54 AM No comments:

Susan may be on a fast Boyle, but not this singer

Looks like Susan Boyle is pretty steamed at the media. Not me, though. Booklist just reviewed Queen of Disguises -- our first time ever in that august journal. Wrote Gillian Engberg, "Dinah Galloway, the tweenage “snooping songbird,” once again combines her singing talent and sleuthing skills in an engaging mystery set in British Columbia. While auditioning for a commercial for Vancouver’s 2010 Olympics, Dinah learns that Violet Bridey, a would-be jewelry thief whom she helped capture, has escaped prison and is seeking revenge. Dinah goes into hiding at a fitness camp, but she quickly realizes that her location is far from secure. ... Filled with surprise revelations, colorful characters, and slapstick pranks, including a memorable fart-cushion incident, this is sure to please the middle-grade audience."
Posted by Melanie Jackson, author, editor, piano student at 3:15 PM No comments: 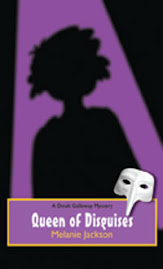